The silent generation people are born between 1925 -1945, with the youngest in this group aged seventy-five, and the oldest being ninety-five. Hank is in his mid-eighties and overcame much emotional turmoil and mood swings in his old age and analyzes through self-reflection of his life. Hank was uprooted three times in his life and lived in five countries of the world with different cultures. Hank first migrated from India to Pakistan in his teens with his parents, a different world for him at the time, in he was a child, and can hardly remember his good old days playing and living in his early childhood. Also, his religious alignments were so very different from where he was born to where he migrated to. Hank has many friends who are around the world and migrants. Hank lost all connections with them a long time ago. Hank transitioned in many cultures and finally transformed him to a new culture he never dreamed of before. Hank in his life experienced migration to many countries, and is intrigued by migration and humanity stories, their life journey stories, focusing demographics, cultural and generational clashes, and adjustments and their contribution to understanding. Hank is counting those coming of age today, that makes five generations over a span of eighty-five years.

Hank learns from the experts that the changes in the brain that play the most prominent role in age-related memory decline all bear on the mind’s networking capability. Around middle age, the variations in the normal flow of information from neuron to neuron interfere with the processing of data of learning and remembering, and changes in the thought process that contribute to old-age. Memory loss is lesions in the brain’s white matter, the bundles of axons that transmit messages throughout the brain and central nervous system, starting around the mid-sixties. Gerontologists and psychologists are coming up with data to support the idea that the lives of the elderly will be more rewarding if they work at it. Through research, a few years ago, scientists found that aging brain does grow new cells, and what is interesting about this finding is there’s hope that one day it may be possible to offset the damage and severe memory loss brought on by degenerative disorders, such as Alzheimer’s, through brain activities.

MUSIC AND THE BRAIN

Hank has come a long way in fighting the disease and helping others in his situation. Alzheimer’s steals self. Hank is fighting for the self-preservation of who he is. Hank chooses to live in a friendly assisted living/memory care Center and wants to contribute to biomedical knowledge writing about the challenges and facts Alzheimer’s faces every day. Hank feels something needs to be done to their social and personal selves. Hank wants to be a friend to all human suffering Alzheimer’s. 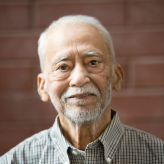 Next StoryInside the Mind of Alzheimer’s